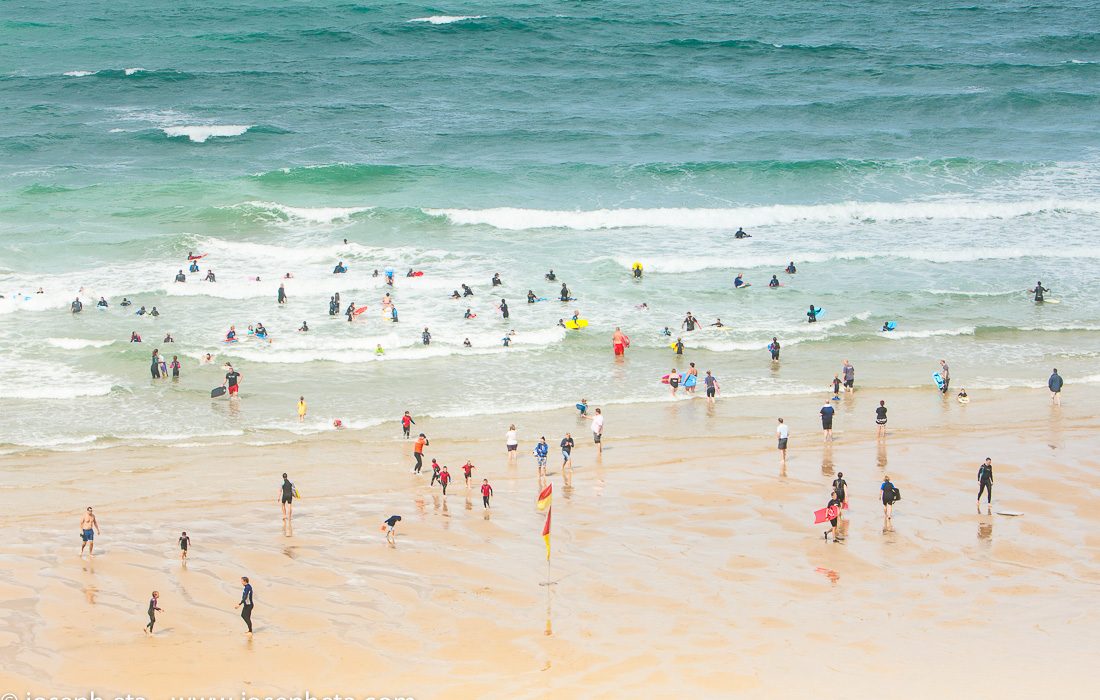 It’s amazing how contrasting England can be – a six-hour drive from London will take you to one of the country’s natural beauty spots, Cornwall, England. Its beautiful coastline,  plethora of beaches and summer weather makes it one of the best beach holiday destinations in the UK. 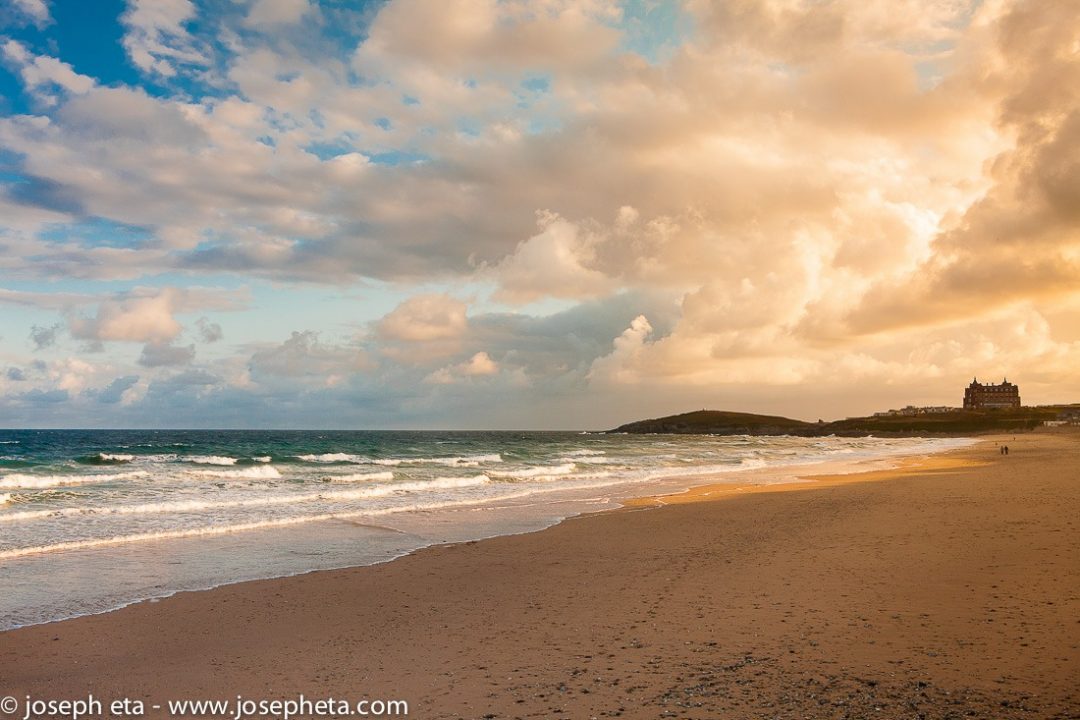 Sunrise at Fristal beach with the Headland Hotel in the far side. This image is available for purchase as a fine art print at https://shop.josepheta.com/collections/nature/sunrise-at-fristal-beach

The peninsula is often used as a backdrop on TV, you might have seen it in Poldark and Echo Beach among other shows.

St Ives in Cornwall has a strong relationship with art. Once it was connected by the Great Western Railway in 1877, the town attracted artists thanks to its idyllic and dramatic setting, including breath-taking cliffs, windswept beaches and picturesque harbours.

Not long after, the St Ives School of Painting was established, which really helped to put St Ives on the art map. Specifically, in the 1950s, the St Ives movement came together which was a group of modern painters, including Roger Hilton and William Scott. The artist and sculpture Barbara Hepworth is one of the most famous artists from the area. 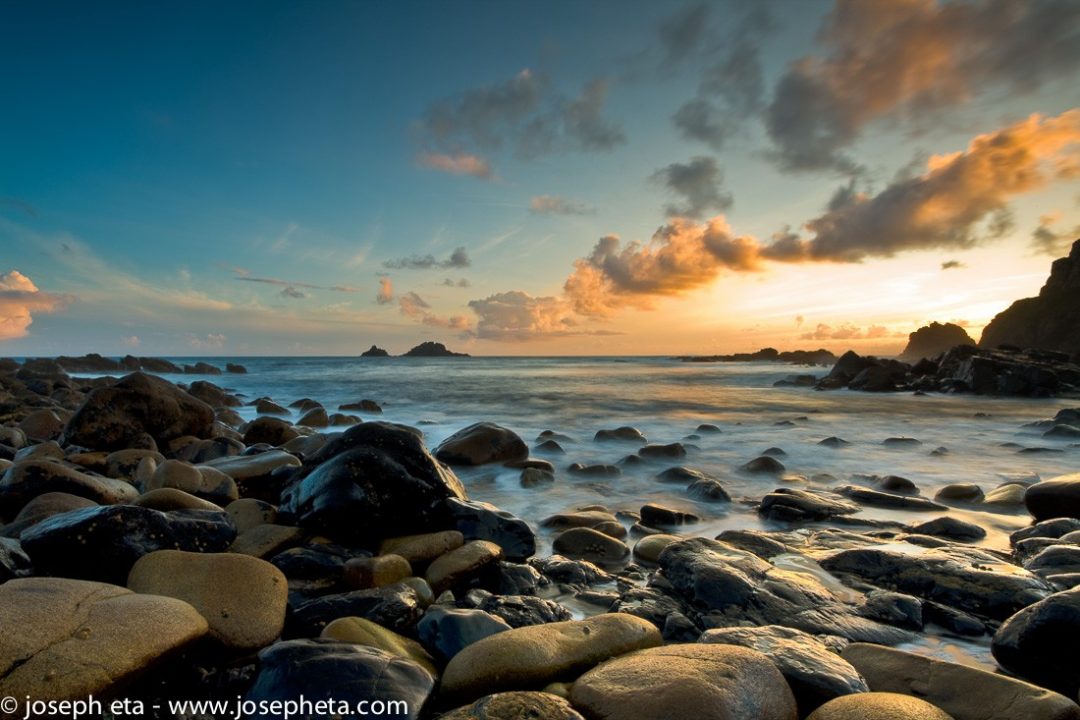 Sunset at Cot Valley (Porth Nanven) in St. Just near St. Ives in Cornwall. This image is available to purchase as a fine art print from https://shop.josepheta.com/collections/nature/sunset-at-porth-nanven

Today local art is widely available in boutique galleries dotted all over St Ives. The Tate is one of the best places to see this celebration.

Known as the Cornish Riviera, Cornwall lends itself to some great apartments and rentals. There’s a wide variety of choice on AirBnB including idyllic cottages with sweeping vistas for a truly British experience. Camping in the area is also popular.

For a touch of luxe, St Moritz Hotel with its Cowshed spa is a real treat, plus they offer great rental options too. 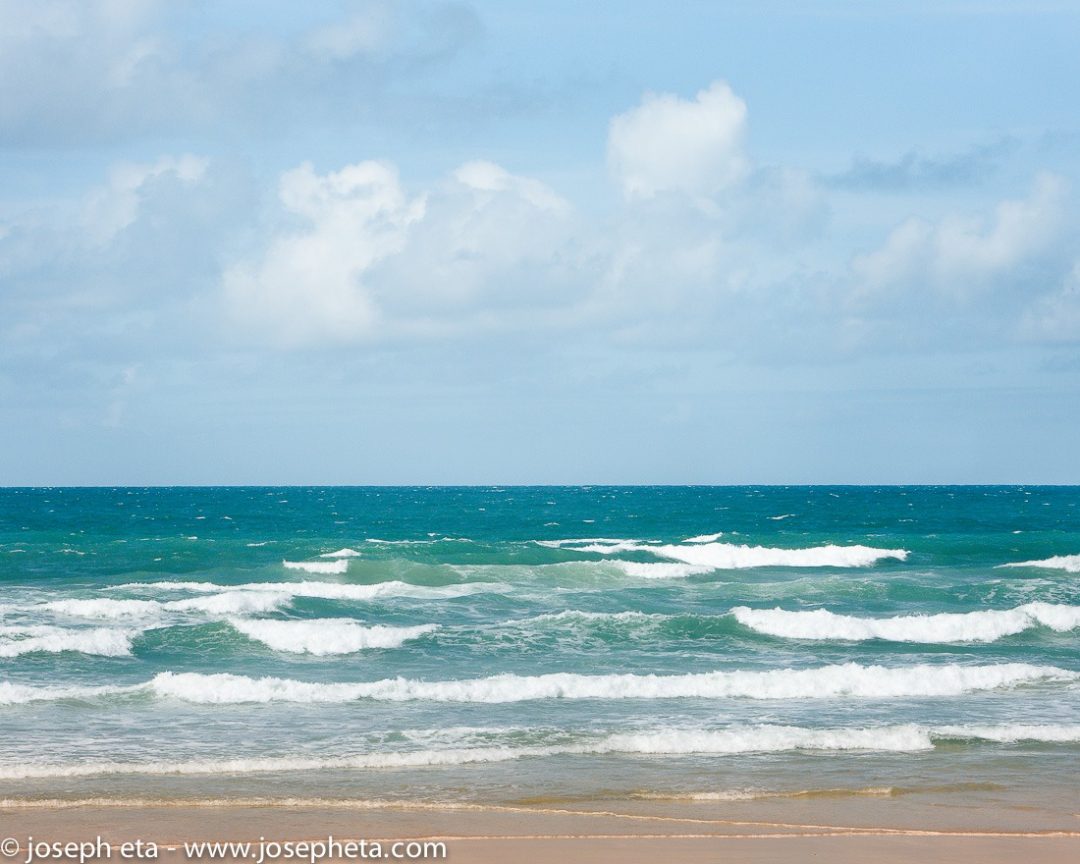 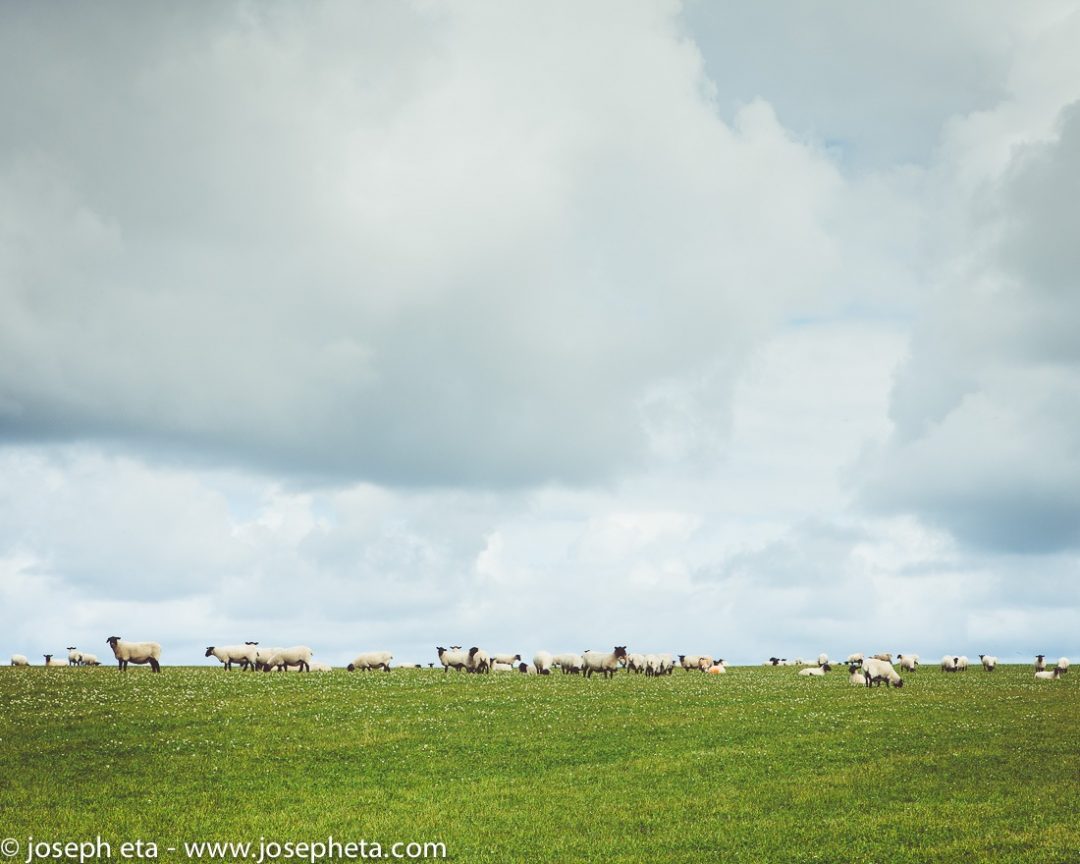 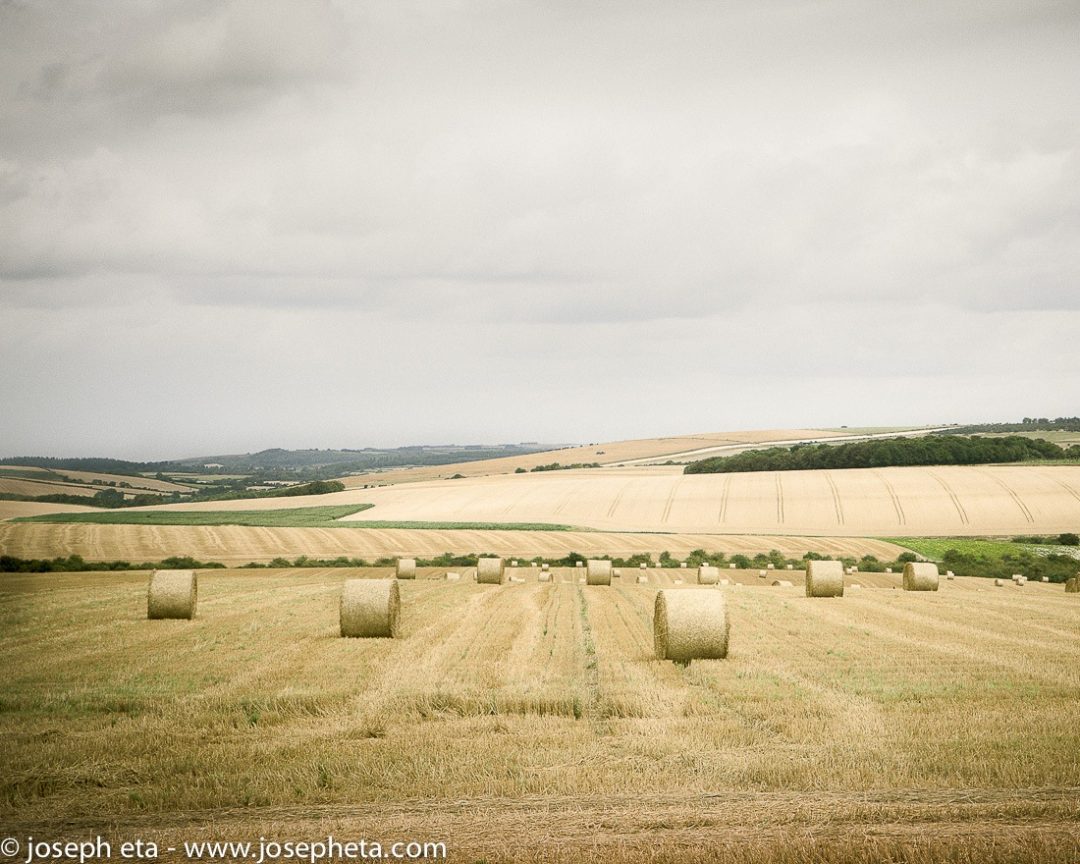 When you think of England, you might not automatically think of surfing. Yet, Cornwall is the place to catch a wave. As such, it attracts a young ‘up for it’ crowd. There’s plenty of classes for ‘Groms’ (children) at the top beaches with full kit available to rent. It’s great to see the little ones paddling and learning to catching their first wave! 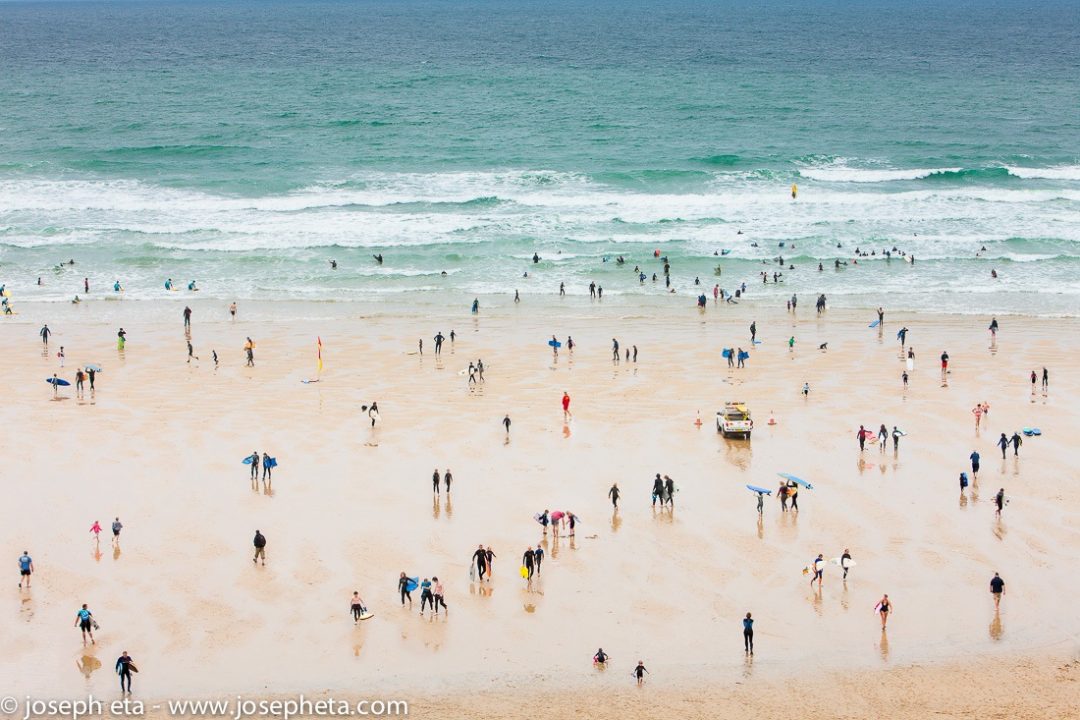 14 images of surfers on the beach superimposed into 1. Images were captured over a 2hour period. This image is available to purchase as a fine art print here: https://shop.josepheta.com/collections/nature/surfers-at-watergate-bay

Popular beaches like Fristal beach and Watergate bay beach are well serviced with lots of lifeguards on hand. Yet, it’s wise to be cautious and only surf in designated areas indicated by flags.

Offering powerful big waves, Fristal is one of the most famous of the 300 beaches in the area, and is home to the annual Boardmasters event. If you’re not quite ready to dip your toe in, Bodhi’s Beach Café has become a popular hangout to warm up! 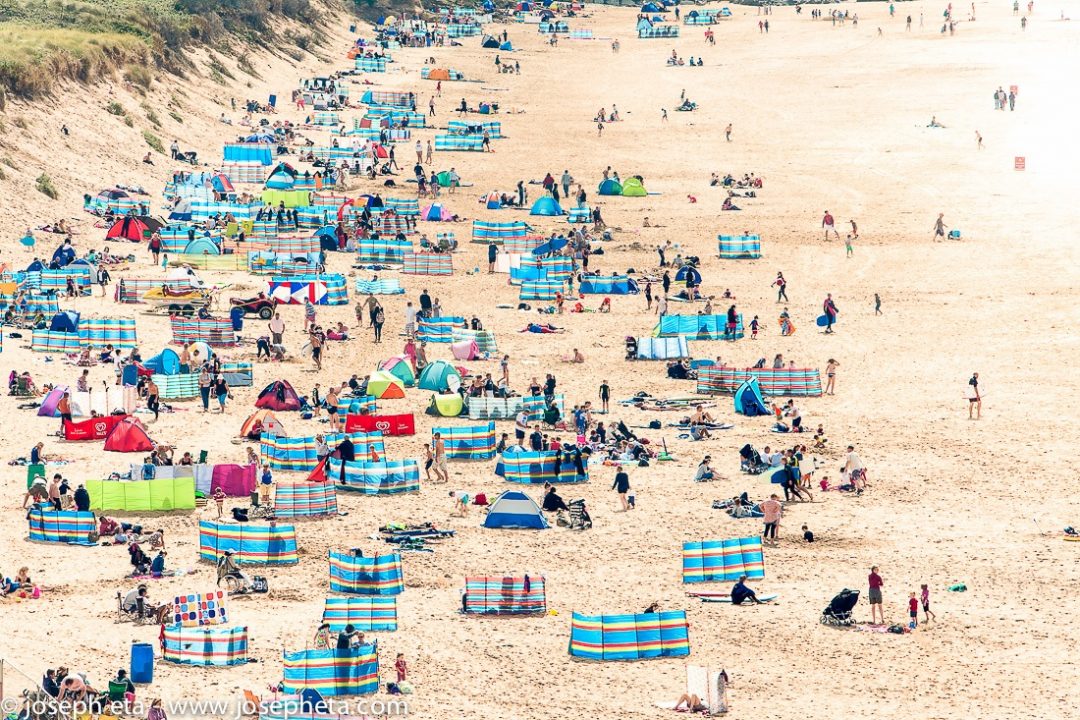 Sunbathing done the British way. This image is available for purchase as a fine at print at https://shop.josepheta.com/collections/nature/summer-at-fristal-beach

By car is the only way to see the local area, get yourself a Cornwall map and head to other noteworthy beaches nearby, including; Tolcarne Beach – a similar beachfront resort, Porth Beach – for those who’d rather sunbathe than surf, and Perranporth beach, offering one of the biggest stretches of golden sand.

If you come during British summertime, be sure to head come between June 16-17 for their awesome ‘Electric Beach Festival’, promising lots of fun to a backdrop of great tunes. It’s also worth mentioning that Newquay Zoo and Blue Reef Aquarium are both nearby and great for little ones. 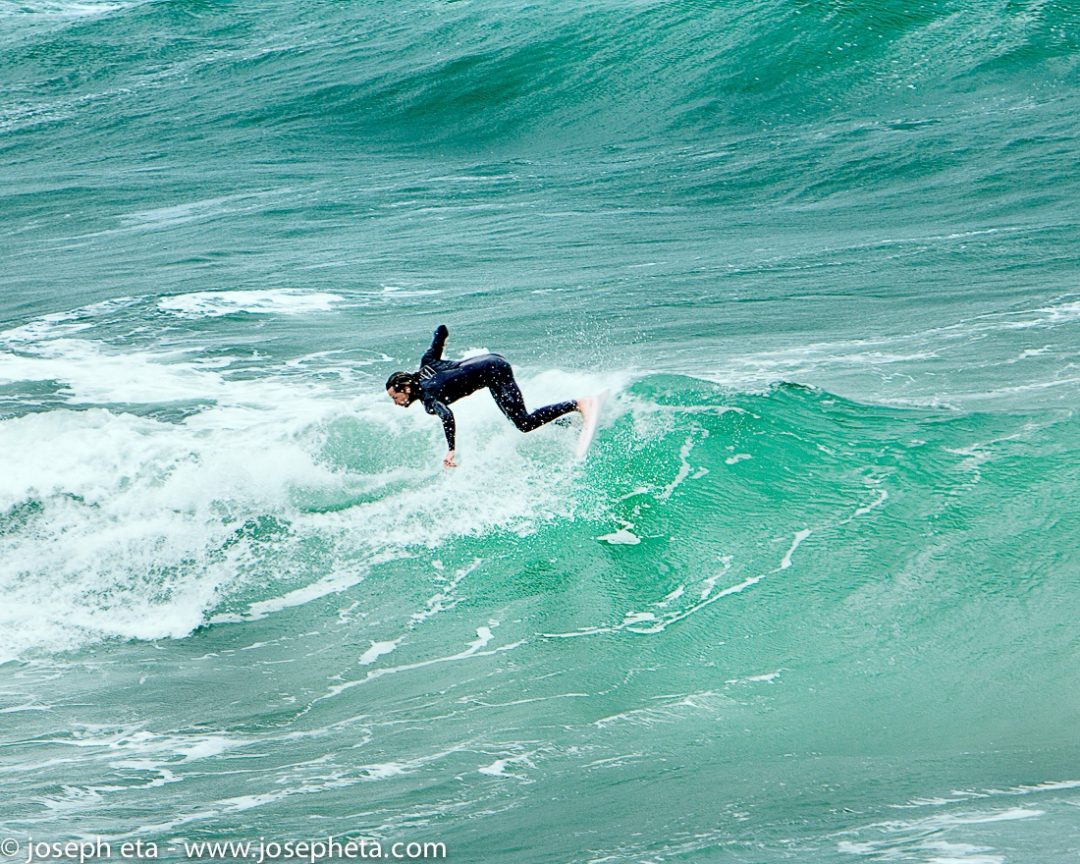 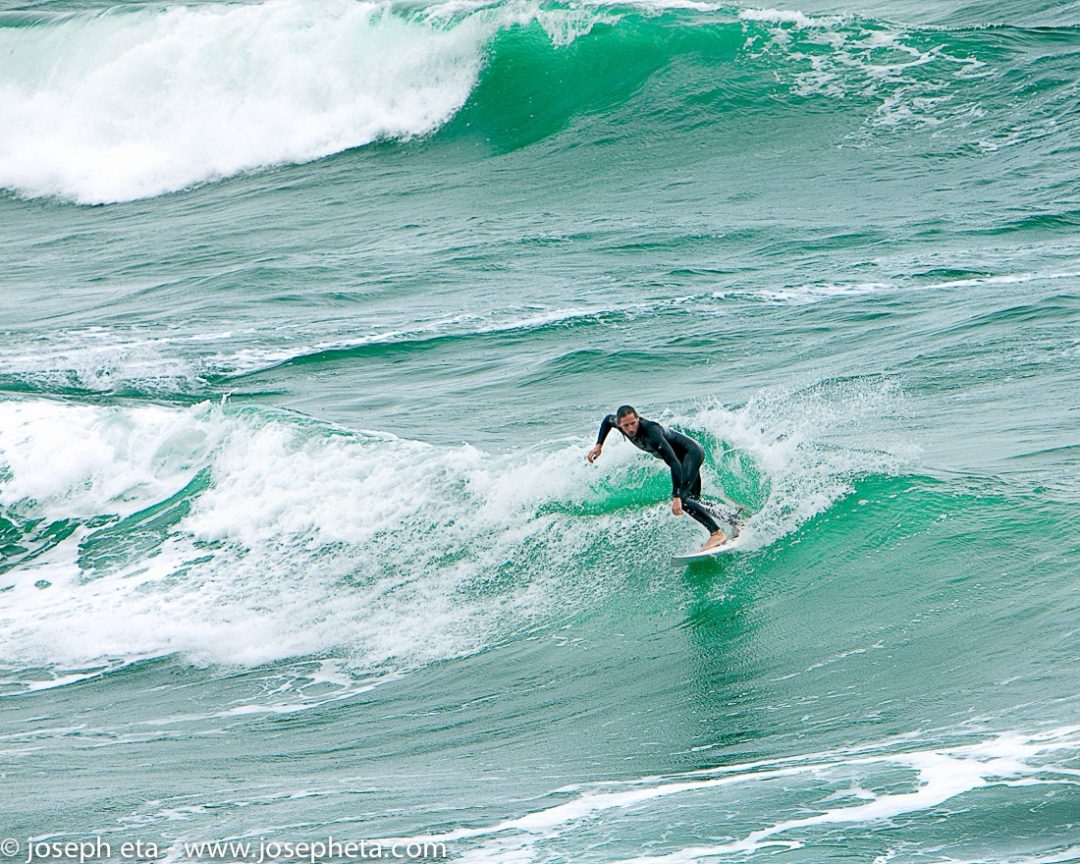 Your greatest problem will be deciding where to eat, since there’s so many great options.

You might also like Ben’s Cornish Kitchen (West End, Marazion TR17 0EL) which offers creative combinations in a rustic setting.

But, no trip to Cornwall is complete without sampling a local Cornish pasty (meat pie) and a Cornish cream tea – hearty, heavenly and thankfully available everywhere. Why not go whole hog and try their local cheese ‘Cornish Yarg’ too. Delicious!

Trains are serviced by Great Western Rail – or you can fly to Cornwall airport from select destinations within the UK and Europe.